visual help : see report Introduction V for the other depictions

interpretation :
… the narrator addresses ‘a candidate’ – a fellow corrupt adm-soul –
what his high position and work will be in their evil reality ;
the chapter’s main theme is they as “the sons of Ammon” , per prophets ,
but also describes the situation of their reality ;

how to read below translation :

interpretation :
… the unknown very first concept causes us immediately problems :
the SSA ‘son’ is always matrix , and it seems it has been south at AKER  —
as opposed to the sécond ‘branch’ which “wandered astray”, so is an eden-concept :
see how both concepts return in next section ;
2) THPHT as gate must be “dimensional wormhole”, compare Tophet in prophets ;

interpretation :
… the main mountain is the one God will make “tob e a burnt out mountain” (prophets) ,
as a construct which we identify as the original of the Giza pyramid ;

interpretation :
… this section is obviously about what prophets term “the sons of Ammon”,
as the specific enemies of the 144,000 sons — in Rg-Veda called ‘kavi’, ‘seers’ ,
and also in TWO prophetchapters these are described as “invoking eden essences” ;
2) they don’t call themselves ‘corrupt adm-souls’ but wé need to know the difference ;
3) ‘garments made of words’, or : of created of light ; a for us unknown concept ;

interpretation :
… again the transformation from the south (AKER) to living in their north ;
the glyph SEB “jackal upon perch” is ‘make the solarplane (S-B) on high’ ;

interpretation :
… here we are Lost  —
we don’t know yet what is a workable concept as ‘the átert-shrines’  ;
the “dimension below” is hardly ‘eden’ but perhaps their AKER region south ,
while there shows no “to smite or steal or carry off”, when eden would be intended ;
also ‘the vine’ is unclear ;

interpretation :
the “bringing the eden-word (as Nile) by the support” was in CoffinText 510 ;
the same opened-word also fills their descended house-eden (as ‘Moab’ now) ;
2) THEPHT must bet he same as previous ? 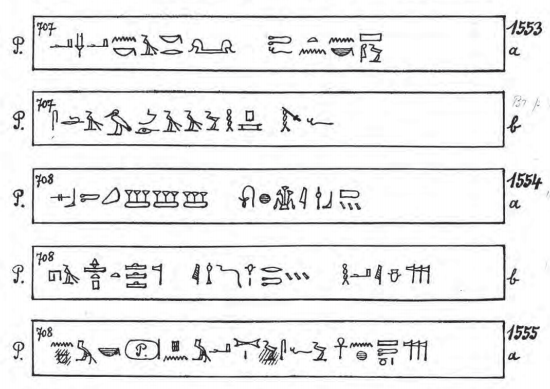